Learn Spanish in Valladolid - Study Spanish at University of Valladolid

The capital of Valladolid province in theCastile-Leon region, Valladolid is a medium-sized city of around 320,000inhabitants two hours to Madrid’s northwest. The city’s nucleus consists of ahistoric district, while its focus on industry over tourism has shapedValladolid’s present-day modern appearance. 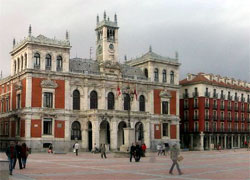 The city is characterized by an intensecultural life that has always been closely tied to its university. Along withthe advantages of modernity, Valladolid offers a significant cultural legacy ofmonuments, museums, gastronomy and history.

The heart of Valladolid’s old quarters isthe 13th century main square (Plaza Mayor).Numerous historical buildings such as the Royal Palace, City Hall and thecity’s museum surround the square, which stands as a fine example of SpanishBaroque art and is said to be the first main square of its kind in Spain (thefamous city squares in Madrid and Salamanca used Valladolid’s Plaza Mayor as a model).

Despite evidence of habitation inPre-Roman times, it wasn’t until the Middle Ages that Valencia attained anykind of stable occupation; the city’s name probably dates back to this period.

For years it was believed that Valenciaoccupied the site of Pincia, a city of the ancient and highly cultured Celtictribe known as the Vaccaei (dating back to the Iron Age). Recent archeologicalexcavations, however, have placed Pincia at nearby Padilla de Duero.

Valladolid first emerged as a city in the11th century and experienced great expansion in the 12th and 13th centuriesthanks to commercial privileges granted by the monarchy. In 1346, Pope ClementVI allowed for the construction of the University of Valladolid.

In 1469 Queen Isabella I and King FerdinandII – also known as the Catholic King and Queen of Spain – were married in thecity. Under the Catholic Monarchs, Valladolid enjoyed a period of greatacademic dynamism thanks to its university, transforming the city into abirthplace of modern bureaucracy.

By the 15th century Valladolid had becomethe capital of Spain and residence of the monarchy (the capital was changed toMadrid by Philip II in 1561). Between 1601 and 1606 the city became the centerof Spain once again as it was briefly restored to capital status by Philip III.

In 1506, Christopher Columbus died inValladolid in a home that has since been opened as a museum of the renownedexplorer’s life.

Valladolid played an important roleduring the 19th-century Napoleonic Wars as the city chosen by Napoleon to househis troops upon their arrival to Spain. The hostile reception of French troopsby Valladolid’s residents marked the inability of Napoleon’s armies to pacifythe people of Spain throughout its eventually successful liberation struggle.

Valladolid has an excellent national sculpturemuseum (Museo Nacional deEscultura) containing much religious artwork, some of which is used duringthe city’s famous Holy Week (Semana Santa)celebrations. Surrounding the museum are numerous historical buildings such asthe San Pablo and Antigua churches, the latter of which is a beautiful exampleof Spanish Romanesque architecture.

The city center holds a special charmwith all of its history and culture. The San Martin church area is especiallyold; strolling through its narrow character-filled streets is an unforgettablypleasant experience.

Valladolid’s cathedral is not far fromthe University and well worth a visit. This ancient structure is famous for itsmissing tower; the architect Juan de Herrera was called away to build thefamous monastery / royal palace of El Escorial near Madrid, leaving thecathedral unfinished to this day. For more information about other Spanish cities take a look at www.quality-courses.com.

The historic district’s epicenter isthe well-preserved Plaza Mayor (mainsquare), which – as noted above – acted as a model for the famous main squaresin Madrid and Salamanca. The square’s laid-back atmosphere makes it a nice areato relax in. Plenty of interesting places surround it and intriguing alleysemanate from it.

The Campo Grande park located betweenthe shopping center by the same name and the railway station is a favoriteretreat for locals when the shops close and the city winds down. The park isvery attractive and highly recommended. Here one can witness Spanish relaxationfirsthand as children play in fountains, adults enjoy delicious tapas and grandparents gather in jovial,animated groups.

Valladolid’s specialty is lechazo (suckling lamb), which is oftenslow-roasted over a wood-burning oven and served with salad. Lechazo is so popular that many of thecity’s restaurants offer the dish exclusively.

Valladolid is famous for its baking,with a variety of bread to go along with virtually every dish. Some of the mostfamous breads include the cuadros from nearby Medina del Campo and the lechuguiños,a very aesthetically pleasing bread arranged in concentric patterns. Typicalpastries include sponge cakes, pine nut balls and cream fritters.

More recently, Valladolid has developedan excellent tapas tradition(although in most bars tapas are notprovided for free along with a drink as in some Spanish cities). A yearly tapas competition and the city’s annualfestival provide excellent opportunities to taste this emerging aspect ofValladolid’s local cuisine.

As a student town, Valladolid’snightlife is especially vibrant when semesters are in and the studentpopulation is at its max. The city offers a truly wide variety of tapas bars, restaurants, pubs anddisco’s to choose from.

Some of the liveliest parts of towninclude the Paraíso-El Portu area, Plaza de San Miguel, El Cuadro andCantarranas. Most of the nightspots in these areas cater to a student crowd,while Vicente Meliner street is more popular for nightlifers who’ve left theirtwenties behind.

Numerous Irish pubs and chupito bars (establishments thatspecialize in liquor shots) can be found here. TheChupi bar on Paraíso street (which actually consists of two bars;a large and a small one, both nearby) is among the most popular chupito bars in Valladolid.

For avid dancers, San Miguel street is afavored destination. Dress is casual in most places but more formal attire(i.e. no sneakers) is required in some clubs. Disco’s playing techno music canbe found in the El Cuadro area.

An interesting aspect of going out inValladolid is the possibility of getting treated to a medieval serenade by the Tuna de Derecho musical group. Thisgroup consists of students from the University’s law school that provideimpromptu concerts in return for small donations. Dressed in black, they wearcapes and sing to the musical accompaniment of mandolins, tambourines andguitars. The tradition dates back to the 12th century when poor students had torely on their musical skills to secure room and board.

Study At University of Valladolid