Learn Spanish in Malaga - Study Spanish at University of Malaga 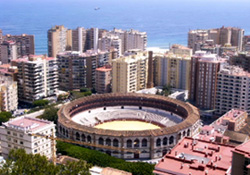 Malaga, although not the capital of the region of Andalucía, is often referred to asthe capital of Costa del Sol (Sunny Coast). Malaga is the largest coastal city in the South, with over 600,000inhabitants and over 1 million living within the metropolitan area. Malagaenjoys the Mediterranean climate with around 320 sunny days annually. The seabeing so close by helps control the hot summer days and the temperature in thewinter doesn’t drop too much below 13ºC (55ºF) because the mountains protectthe city.

Malaga and the surrounding cities within the province of Malaga havebeen famous for many years in the tourism industry. The city has the 3rdlargest international airport in Spain and the2nd largest port. It is a growing city and one of the top culturaland business centers in the south. Malaga is also known for being thebirthplace of Pablo Picasso and Antonio Banderas. The city placed a bid to become the European Cultural Capital in 2016,because of this the city will continue to expand in the coming years, includingan underground metro system through the city. 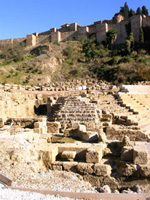 Because of Malaga’sposition next to the Mediterranean Sea it has beeninhibited for over 3000 years. The first settlers were the Phoenicians and thetown was called Malaka. It was a major commercial center, even in that time,and was exploited for its large amounts of silver and copper. Phoenicians ranthe city until around 550 B.C. when the Carthaginians took over the rich land.They were able to control the commerce in the area until 218 B.C. when theRomans began taking over most of Spain.

When the Romans tookcontrol of Malaga, the city began to grow and become an important region in theSouth of the Peninsula. They created economic stability and made thecity a cultural center. Important construction was made, that still standstoday, such as the port of Malaga and the Roman Amphitheatre. The city wasnamed as an ally city to Rome; this highly increased its growth andimportance within the Roman Empire. But, with thefalling Roman Empire in the early 5th century,Andalucía coasts, including the city of Malaga, were being invaded by Visigoths. Theyconquered the whole city in 623 but only held the reign until around 710 whenthe Moorish invasion began.

In the early years of the Moors reign in Malaga,they spent the time defending the city and area from invaders and working toexpand their own territory. Not until 743 did the Moors begin to work on theexisting structures and additions to the city. The Moors in Malaga were underthe ruling of different Moorish Caliphs who were in what is now Granada. ThoseCaliphs were responsible for the building of what are now 2 of Malaga’s mostimportant structures, the fortress Alcazaba and the castle above it,Gibralfaro. 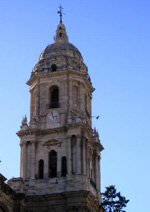 In the 14th century the Christians begantrying to defeat the Moorish rulers, but it wasn’t until 1487 that they finallytook rule over Malaga, with help from small groups of Christian people from thecity. Many Moorish families who resided in Malaga in this time were killed orsold as slaves, the city changed its appearance from Muslim to Christian andthere was a lot of devastation. Luckily, the Christian defenses did not destroyall of the Moorish constructions, like the Alcazaba which still remains today;the Christians also used it to protect the city.

The 17th and 18th centurieswere difficult for the city, several natural disasters occurred and there weremany epidemics. The city also fell under the rule of Napoleon in 1810, but onlyfor two years. In the later part of the 19th century, Malaga sawmany opportunities of growth and expansion; it also started to become a touristhot-spot for the wealthy.

In the 1960s, Malaga and Costa del Sol saw the tourismindustry explode. There were resorts and hotels built all along the area andtoday it remains as one of the busiest destinations, with around 6 millionvisitors per year.

Malaga has plenty of leisure activities to keepeveryone busy, from beach lovers, shop-aholics, those who appreciate richculture and anyone who just wants to party. The main street, cutting betweenthe harbor and the historic center is AlamedaPrincipal; from there you can reach Plazade la Marina near the port and CalleMarqués de Larios which is the main shopping street. Walking into thecenter from Larios you will find Plaza de la Constitución which is one of the biggest squares in the city.Branching out from there you can find tapas bars, restaurants, pubs, boutiquesand cafes.

There are a few commercialshopping centers in the city, El Corte Ingles, just off of Alameda Principal and the brand new Vialia, which is also home to the Malaga train stationand next to the main bus station. 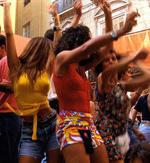 LaMálagueta is Malaga’s main beach. It is located to the eastof the city center and is always bustling with tourists and locals alike. Thereare several chiringuitos (restaurant/bars situated on the beach) where you can enjoy some of Malaga’sown fish and seafood dishes and have some drinks while you enjoy the sun andsand.

Each year Malaga holds a Film Festival (normally inMarch), Tapas Festival, and an International Jazz Festival (beginning ofNovember) and, of course La Feria,the biggest party in Malaga. La Feria isheld in August and it is 11 days of non-stop partying in the city center aswell as the Real, the fairgroundslocated just outside of the city.

The gastronomy in Malaga is truly steeped with Mediterraneaninfluences; the proximity of the sea makes seafood and fish a daily constant inthe city. There are also many recipes and dishes that follow the generalSpanish style of cooking. The use of olive oil in Andalucía has proven to lowerthe chance of heart problems as well as assist with digestion.

Some of the most typical dishes include shrimp inall varieties, fried/roasted/boiled fish, anchovies and sardines. But, boquerones are oneof the most famous little fish in Malaga; in fact people from Malaga are called boquerones. This small fish is served in vinegar or fried, sometimes with lemon.They are so small that most of the time you can eat the entire thing, bones andall.

Malaga and Andalucía in general are also widelyknown for the cold, vegetable soup Gazpacho. It is made from blending freshveggies together and it’s a great cure to a hot, summer day.
You can find some great meat dishes as well in thecity, there are many varieties of chicken and pork, if you are feeling extraadventurous try the specialty Rabo deToro, which is bull’s tail!
To accompany your dinner, taste any of Malaga’s ownwines. There are a number of sweet and dry wines made directly in Malaga andthey can go great with some seafood or as an after-dinner drink. During La Feria, you can find everyone drinkingthe cold, sweet wine called Cartojal.

The nightlife in Malaga isvery diverse and there is definitely something for whatever mood you’re in. Thereare a variety of restaurants, pubs, tapas bars and bodegas (local taverns whereyou can try the diverse wines from Malaga. Málagueños love to go out and meet with friends to party and as the local population are normally very sociable it is easy to meet Spanish people a practice your Spanish skills outside your Spanish course in Malaga. Most every night of the week youcan find the streets in the center full of locals, as well as tourists. InMalaga you can find small, local places with tapas and Malaga’s own wines, youcan also find an Irish pub with live music. The botellón is still allowed in Malaga, although it has been movedoutside of the center. Now it is a street, blocked off by police, near theharbour and Plaza de la Marina. Onweekend nights you will find many of the younger people gathered there from midnight until around 2-3 a.m. when they head into the center to bars and discos. This is a fun (&cheap) way to start the night, plus a good way to meet new people.

Study At University of Malaga