Learn Spanish in Salamanca - Study Spanish at University of Salamanca

Salamanca is located in the province of Castilla y León, in the mid-western part of Spain. Thecity’s population is around 180,000 and although it is a smaller setting, Salamanca hasmuch to offer like a bigger city. 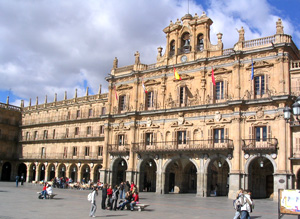 Salamanca is renowned for being the home to the oldest university in all of Spain; it’salso among one of the oldest in Europe. This quaint city gets a lot of its modern culture and atmosphere fromthe University. When courses are in session, the streets are full of studentsand there are plenty of different cultural, exciting activities going on. Salamanca is alsoknown has being the home to, what some say, is the purest form of Spanish.

Salamanca holds true to its heritage as most of the city center’s buildings are inthe pure form of the old, traditional style. The city is a declared WorldHeritage site by UNESCO. There are mountains near the city, although the centeritself is mostly flat. There are also many stunning lakes in the area,providing a serene, natural atmosphere.

Salamanca was first inhabited by Celtic tribes in the 2nd century.Later, the Greeks and Carthaginians moved in and were the first to establish asmall village on the location of current day Salamanca. Thename supposedly comes from a famous historian from Greece calledSalamántica who resided in the village.

Along with the rest of Spain and theIberian Peninsula, the Romans moved in. Today, there are still important structures fromthe Roman Empire in the city; there is a bridge and part of a city wall. In the 5thcentury the Roman Empire diminished, but unlike most other parts of Spain, Salamanca did notfall under control of the Visigoths. Some different Iberian clans took control,but Salamanca remained quite neutral and unnoticed.

With the Moorish rule over most of the Peninsula, Salamancaeventually caved into the hands of the Arabs in 712. Since it was positionedbetween the rule of the Moors and the Spanish kingdoms in the North it becameand area under constant war.

Inthe early 12th century, with the start of the Spanish Reconquista, Salamanca was put under rule ofthe Christians. From then on, for many years, different tribes and groups ofpeople lived around the city.

In 1218, King Alfonso IX founded the University of Salamanca. Itwas known all throughout Europeas a very prominent university. The city began to grow; it suffered for aperiod with some struggles of different rivalling groups, but in the end of the15th century the city was mostly peaceful. The ‘Golden Age’ in Spaindefinitely brought benefits to this small, but growing city. Many new buildingsand developments in the city occurred in this period. 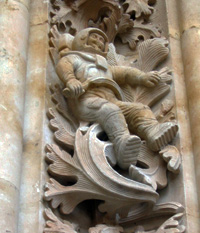 In the early 1800s, Salamancaonce again suffered through changing rulers. When Napoleon invaded Spain, althoughit was only 4 years, much of the heritage and growth that Salamanca had wasdepleted, the University was also almost closed.

At the turn of the century, Salamancawas once again rebuilt and recovered. The infrastructure of the city wasupdated as well as the addition and reconstruction of many roads and means ofcommunication.

In the 1970s, the University experienced a change, inthe early years it was more or less a luxury for only the upper class, but nowthe chance for higher education was given to the whole community. Many newbuildings were constructed to house new students and faculties, but as seentoday, much of it kept the traditional Salamanca designstyle. 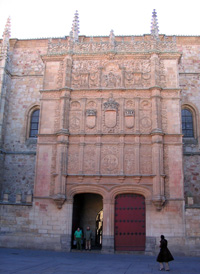 In Salamanca you can see some of the most amazing and best kept buildings andarchitecture from the Renaissance period. There is also a bridge that was builtby the Romans and two Cathedrals; these monuments and spectacles allow you tounderstand and view a diverse piece of culture from Salamanca’shistory.

Another major point of interest in the city is Plaza Mayor, the city center’s major square, which was created inthe 18th century. It has been said to be one of the most beautifulin all of Spain. The center is based on Plaza Mayor and from there you can wander out tothe surrounding streets to see many more monuments.

Being of major importance in the city, theUniversity is quite interesting to discover by walking around and taking in allof the history and culture that it has within the architecture. There are alsoseveral museums in Salamanca with different artifacts and themes that can be worthwhile to check out.

InSalamanca and the province of Castilla y León (as well as most of Spain) they are known forgrowing and eating their own agricultural products. Jamon Serrano is a very popular type of Spanish ham that comes fromthe region.

Between summer and winter in Salamanca, the menu changes quitea bit. In the colder, winter months stews and roasts are very popular. Awell-known dish is Cochinillo al Fuego which is roasted suckling pig, also there are a meat pies like Hornazo and Chafaina which is rice mixed with different cuts of meat.

Insummer, tapas are always a good, easyway to feed your hunger. Salamanca is full of tapas barswhere you can sample many different regional foods. Some places you can evenfind traces of the Moorish history of Salamanca, through food. 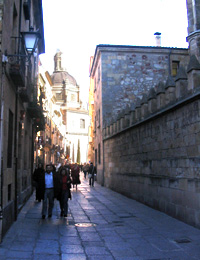 Although Salamanca is nota huge city, there are still plenty of options for going out at night becauseit is a university city. Often times, students meet in the city center in the squares and localbars for tapas and drinks. Each night of the week you can find somethinghappening in the city center, plus swarms of locals, students and tourists especially in the many bars and disco that are popular amongst the foreign students that are studying a Spanish course in Salamanca.

Around Plaza Mayor and Gran Via in the city center you will find a variety of bars andpubs, each with their own distinct feel. Later at night, you can find studentsand locals in the discos that the city has to offer. One of the best thingsabout going out in Salamanca is that since it’s a university city, prices at most barsare balanced out to fit a student’s budget or with special offers. In the Bordadores area of the city you willfind many bars and cafes, sometimes with live music. To find music varying fromthe punk scene to hippie style, head to Plazade San Justo.

Study At University of Salamanca