Learn Spanish at University of Valladolid

Study Spanish at University of Valladolid 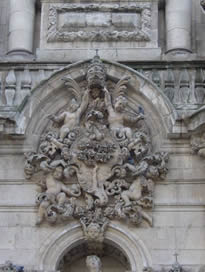 The University of Valladolid (Universidad de Valladolid) is a public Spanish institution established in the 13th century by royal decree. Today the University is attended by over 30,000 students and is composed of over 20 specialized schools with campuses in four cities throughout the autonomous community of Castillay León: Valladolid, Palencia, Soria and Segovia.

The University’s more than 700 years of history make it one of the world’s oldest institutions of higher learning. Its solid tradition and strong commitment to quality are a few of the guarantees the University is proud to offer its foreign students from across the world. The Language Center (Centro de Idiomas), where Spanish courses are held, calls the Valladolid campus home; the University’s nucleus, where all the most modern buildings are located.

The campus lies in the center of Valladolid next to the city’s beautiful cathedral, surrounded by rich culture and history. The university’s façade and courtyard stand as breathtaking examples of Baroque art in and of themselves. Thanks to the central location of the Language Center within the University and the campus within Valladolid, foreign students quickly find themselves at one with the intense, enjoyable university and city life.

Spanish Courses At University of Valladolid

The Spanish courses offered at theUniversity of Valladolid are taught in the Centrode Idiomas (Language Center), a modern building equipped with the latestlanguage instruction technologies. The center is located in the Miguel Delibescampus, home to the University’s most modern schools and buildings. Each roomis fitted with audiovisual systems, and the center also enjoys an expansivelibrary and a language laboratory.

Courses are organized in small groups to provide students with an optimal level of personalized attention and qualityinstruction from fully qualified and highly experienced teachers. Levels aretaught all the way from A2 to C2 according to the CommonEuropean Framework of Reference for Languages.

More About Spanish Courses at Valladolid »

Valladolid is a medium-sized city of around 320,000inhabitants two hours to Madrid’s northwest. The city’s nucleus consists of ahistoric district, while its focus on industry over tourism has shapedValladolid’s present-day modern appearance.

History: Despite evidence of habitation inPre-Roman times, it wasn’t until the Middle Ages that... | More >

Leisure: The city center holds a special charmwith all of its history and culture... |More >

Gastronomy: Valladolid’s specialty is lechazo (suckling lamb), which is oftenslow-roasted over a wood-burning oven... | More >

Going Out: As a student town, Valladolid’snightlife is especially vibrant when semesters...| More >