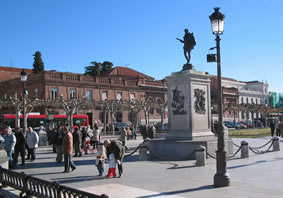 Alcalá de Henares is a small city witha population of just under 200,000 located within 30 kilometers of Madrid. Richin history, the city's historic district was named a UNESCO World Heritage Sitein 1998. Its wandering cobbled streets and well-maintained ancient buildingsconverge on the city's most famous square, the Plaza de Cervantes: a living testament to Alcalá's medievalorigins.

The city's cultural significance isempowered by the more than 500 years of influence generated by its prestigiousuniversity and its fame as the birthplace of the great Spanish writer Miguel deCervantes. The presence of the University of Alcalá gives the city a youthful,international, dynamic feel, particularly during weekends when nightlife comesto its fullest expression.

Interestingly, Alcalá is also famousfor its population of large storks, the giant nests of which are seen atop manybuildings and churches in the city's historic district. The storks themselveshave drawn much tourism to the city over the past several decades, and theroughly 90 pairs that live within the area are protected by official decree andform an integral, celebrated part of city life.

The origins of the city date back tothe birth of the Roman city of Complutum, which throughout its more than fourcenturies of existence would reach a level of splendor and importance that itwould maintain throughout the entire Visigothic period. During the era ofMuslim rule a city was built that with time would come to be known asAl-Qalat-Nahar (the castle of Henares), a name from which the city's currentdenomination is derived.

With the Christian Reconquest in theMiddle Ages the city was rebuilt and situated in its current location, centeredaround the cathedral. But the city's golden age wouldn't arrive until thelatter half of the fifteenth century, with the establishment of the Universityof Alcalá. The presence of the university would generate a process of urbanrenovation, transforming Alcalá into a university city graced with classicarchitecture.

Throghout the eighteenth and nineteenthcenturies the city would suffer a period of decline. The relocation of theuniversity to Madrid in 1836 followed by the sale of church lands lead to theclosing of numerous convents and the cultural degradation of the city.

Today, thanks to the reopening of theuniversity in its original campus in 1977, the industrial development of thepast decades and the city's recognition as a UNESCO World Heritage Site, Alcaláis experiencing a period of economic, touristic, and cultural enrichment.

Perhaps the city's most famouscelebration are the Semana Santa (HolyWeek) festivities, during which time hundreds of thousands of visitors floodthe streets in celebration. The city is also gaining a reputation as one ofSpain's most important sites of cultural tourism thanks in large part topromotional efforts by the city government and the city's prized designation asa UNESCO World Heritage Site.

Alcalá's historic district, which spansover 100 acres, is one of the largest in Spain and holds an impressive amountof buildings of great historical and cultural importance. At its center liesthe city's central square, PlazaCervantes, surrounded by the picturesque ruins of the Santa Maria parishand numerous fine restaurants. The area is ideal for enjoying relaxing walksand traditional Spanish cuisine.

The Cervantes Museum is one of thecity's popular tourist destinations. Housed in a beautiful sixteenth-centurybuilding, it is the historic home of famous writer Miguel de Cervantes (authorof Don Quijote), who was born therein 1547. From its inner patio lined with Renaissance columns radiate a seriesof richly decorated rooms typical of a Spanish Golden Age home andreverberating with some of Spain's most cherished history.

The city has numerous qualityrestaurants, most of which specialize in a traditional regional cuisinecharacterized by broths, roasts, and vegetables. Candies and pastries are alsovery typical of the region, and these are prepared in great luxury andabundance, making them famous throughout Spain. Some of the most known are the almendras garrapiñadas (caramelizedalmonds), rosquillas de Alcalá (donut-shapedsweets), and migas con chocolate (chocolatecrumbs).

Every year, the Jornadas Gastronomicas (Culinary Fests) take place, during whichtime large numbers of tourists visit Alcalá. The city's restaurants preparetraditional regional dishes, allowing visitors to taste some of the foods thatfor centuries have made this region one of Spain's most gastronomically gifted. 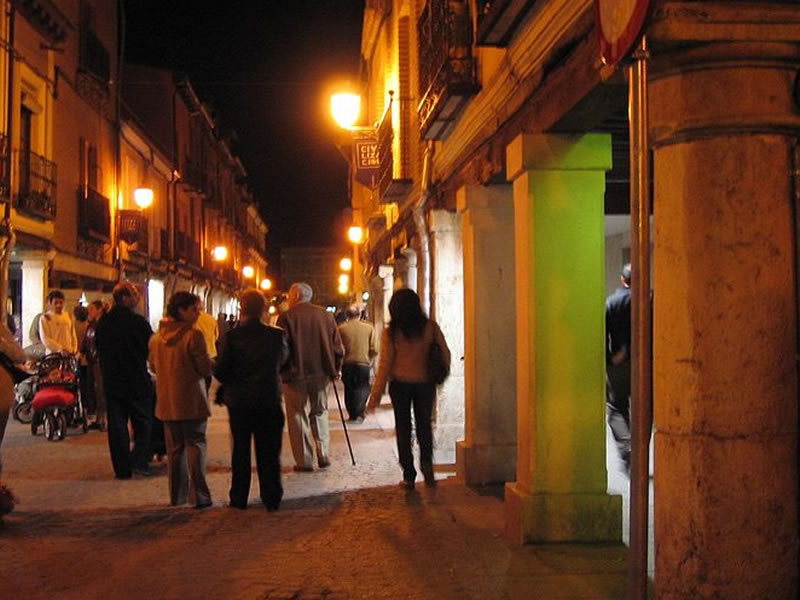 Many of Alcalá's roughly 200,000inhabitants are local youths, young people who have decided to leave Madrid fora more relaxed environment, or students at the city's university (which has astudent body of over 20,000). This endows local nightlife with a decidedlyvibrant and youth-oriented appeal.

The city's historic district is apopular destination for tapas either at midday or in the evening. Later in thenight and especially on weekends, the La Garena neighborhood becomes an activecenter of leisure and nightlife. Plenty of outdoor cafeterias, bars and clubscan be found in this area providing entertainment well into the early hours ofthe morning.