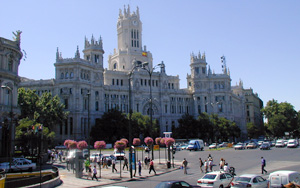 Madrid is Spain’s capital and largestcity; it’s located in the center of the country making it a linking point withall other places in Spain. Madrid is regarded as a majorcity in the world due to its economic, political and cultural assets. Madrid is also recognized asthe financial capital of the entire Iberian Peninsula; it’s also home tothree of the world’s 100 largest companies.
Asthe capital of Spain, Madrid is the home of theRoyal family and the seat of the national government.

Madrid has a population of around3.5 million people; they are called Madrileños.In combination with the locals and all the foreigners that come to Madrid, the city is alwaysfull of life. There are street performers, exhibits, concerts, fiestas and much more.
Theclimate varies quite a bit between the summer and winter months. Usually thesummer is very hot and dry, but in the winter the city sees a lot of rain andsometimes snow.

The first settlers in the area around Madrid were, supposedly,Iberian and Celtic tribes. Since the climate and area wasn’t suitable for much,not many settlers stayed and inhabited the land. When the Romans had control ofthe Iberian Peninsula Madrid was used as a passage way through the land.

Around the 9th century, the Moorish EmirMohamed I arrived in Madrid and ordered the first structure of the city. They built walls and afortress to try and protect the city and their people from the Christianre-conquest. For the following 200 years they were always under attack andthus, were not able to expand and create much in the area, in comparison toother Arab towns in Spain, at least.

In the year 1083, Alfonso VI with his troops,conquered Madrid. Everything that was built by the Arabian settlers was demolished. Madrid went on to be a simple,small town, with relatively no importance in the country until 1561.

In 1561, Philip II established the Royal Court in Madrid and it was then made thecapital.  Philip II began to createmonasteries and the palaces for the royalty and nobles who started coming tothe town.

After the discovery of America, Madrid started to blossomtremendously, due to the financial growth from all the gold coming in from thenew continent.

In the 18th century, under the reign ofKing Charles III, the city went through a make-over. Many of the most importanthistorical and cultural buildings of today were created, like: Paseo de laCastellana, El Prado, Puerta de Alcala, and the Royal Palace.

The 19th century brought Napoleon to Madrid, although the city’stroops tried to fight back the French troops, they fell short. Today thecentral square in the city, Plaza Dos de Mayo, is named after this resistance.It is also still celebrated as a holyday in Madrid. Through the rest of the1800s, Madrid continued to grow and expand as the country’s capital, the roads andrailways began construction, thus connecting Madrid to the rest of the Peninsula.

The end of the 19th into the 20thcentury was a troublesome time for Spain, therewas an economic crisis. The country was in limbo with political instability,and finally it came down to the Spanish civil war from 1936-39. After the war, Spain wasunder control of the dictator General Franco, although the economy was slowlyrecovering the country and Madrid gained many national institutions, the country was still somewhat inruins. In 1978, after the death of Franco, Spaintransitioned into a Parliamentary monarchy and King Juan Carlos I became Spain’sleader.

Real Madrid, one of the top fútbol teams ofthe 20th century, comes from Madrid and plays in Estadio Santiago Bernabéu. You can visit the stadium and the official Real Madrid Museum throughout the year and if you are interested there is even arrange a Real Madrid summer soccer camp where you can play and train in the official instalations of the club where the first team trains. For more information see https://www.ertheo.com/en/real-madrid-camp.htm The city is also home to one of Real Madrid’s top rivals, Atlético Madrid. 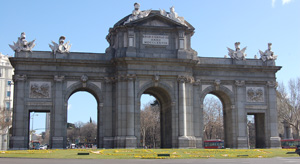 Madrid today is a large city, full of life and culture. There is a great amountof attractions, monuments, museums, sporting events among other leisureactivities. Take a visit to the Royal Palace, locatedto the east of the Manzanares River.

Madrid is renowned for itquantity and quality of cultural attractions, in the Prado museum and the Museo Nacional Centrode Arte Reina Sofia you can see some of the great masterpieces of artists like: Picasso, DiegoVelázquez, Goya and Salvador Dali. The city has several theater and operahouses, the main being Teatro Real, if you want a night out of high-class culture, go to a show atthis opera house. Other fabulous places to visit or have a stroll around are the Puerta de Alcalá, Parque del BuenRetiro, El Rastro (every Sunday this are is filled with street vendors turning it into ahuge market with everything you could imagine!), Puerta del Sol and Gran Via (one of the city’s main shopping streets).

Ifyou are interested in seeing a bullfight, Madrid is home to the largestbullfighting ring in Spain, Las Ventas, it was built in 1931. The season runs from March to October, withbullfights every Sunday, plus other festive days. Real Madrid, one of the top fútbol teams ofthe 20th century, comes from Madrid and plays in Estadio Santiago Bernabéu. The city is also hometo one of Real Madrid’s top rivals, Atlético Madrid.

As Madrid is separated into several different neighborhoods or districts, you canfind whatever you’re looking for just by taking the Metro or walking throughthe historic streets.

The gastronomy in Madrid can categorized astypically Spanish, but with the dynamic mix of people from other regions in Spain, aswell as completely different cultures, Madrid and the surroundingregion feed on a great variety of tastes. Its centrality offers the chance forunique and distinguished flavors to be a part of the mix.

In the many restaurants and bars throughout the areayou can quite possibly find food from almost any region in the world. Thesedishes, mixed with traditional Spanish meals, meld together making it quitehard to discern what can be called original gastronomy of Madrid. Although Madrid is not so close to thesea, Madrileños still appreciate the great flavors of the country’s finestsea-food. It is a key component of many dishes or tapas found throughout thecity. Fresh fish comes in from the coasts each morning, in turn making the fishmarket in Madrid the second largest in the world!

Madrid is known for distinct differences to common Spanish stews and chickendishes. They are also known for creating and changing the famous tortilla de patatas (potato omelet). Amore refined palate could enjoy callosmadrileños, tripe with a semi-spicy sauce. A suiting flavor to any of Madrid’s fabulous flavors couldbe a vino de Madrid, which are Madrid’s regional wines.

Madrid boasts one of the best nightlife scenes in all of Europe, possibly even in the wholeworld. It has the most diverse atmosphere in Spain, youcan find traditional Spanish tapas bars, Irish pubs, German, Scandinavian,jazz, reggae and electronic bars and clubs. It is typical for Madrileños, mostly the youth, to go outand party all night long, stopping in the wee morning hours for chocolate con churros before going home(or directly to work!)

The bars and discos are open year-round, every night andsometimes during the day. There are many places that host bands and differentconcerts, or sometimes concerts and shows are held outdoors in a park. As withleisure activities, you can go almost anywhere in the city and find somethinghappening, but some of the hot-spots for going out are the Puerta del Sol area,Moncloa, Tribunal, Plaza Dos de Mayo, Bilbao and Huertas. Many students choose Spanish Courses in Madrid due to incredible night life and the many free time activities the city has to offer young people.

Study At University of Madrid