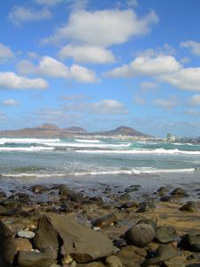 Gran Canaria started to become a popular tourist destination in the late1800s.

People started flocking to the south side of theisland to find rest and relaxation on one of the many sandy beaches.

The earliest recognition of the Canary Islands was that they were hanging on the edge of theknown world, or that they were a part of the lost land, Atlantis.

The island was supposedly inhabited by aborigines fromNorthern Africa calledGuanches since 500 B.C. The island was basically forgotten about by the rest ofthe world, leaving about 30,000 Guanches to lead a peaceful life. This allchanged in the 14th century when Italians, Portuguese, and Spanishstarted invaded the land and taking people as slaves.
Las Palmas de Gran Canaria was originally named Realde Las Palmasby Juan Rejón when he led the Spanish army who overtook and founded the city inJune, 1478. The Guanches tried to resist, but by 1483 many were killed andothers taken as Spanish slaves and forced to convert to Christianity.

In 1492, before he set out to discover the Americas, ChristopherColumbus spent some time in the port area of Las Palmas de Gran Canaria. Thecity was the first ultramarine urban center in Europe;this led as an example in the creation of similar cities throughout the Americas.

After the transition brought upon by the Reconquista,the land changed from being a military base to become more colonized. In thedistribution of the land, cane was discovered and the city became a majormanufacturer of sugar in the European market. This greatly influenced thelayout of the city, its economy and demographics. The capital city was splitinto two zones, due to walls that were built to defend against pirate attacksin the 16th and 17th centuries. Although they were ableto fight off 27 attacking British Ships in October of 1595, the city fell in1599 to an attack from the Dutch, commanded by Van der Does, which resulted inthe devastation of many of the city’s structures.

With the construction of the new port in the 19thcentury the city was able to outgrow the lengthy, lethargic state it had sufferedin the previous centuries. The city began to flourish and become modernized. Thus,the sea started to bring in travellers and settlers to the island. Portuguese, French,Flemish and other Spanish began to flock to the city. They were able to co-existopenly and civilly with the people of Las Palmas. The citywas then used as a tri-continental platform and turned into a melting pot ofcultures that has grown to be the cosmopolitan society it is today.

Of course on the island of Gran Canaria it ispossible to enjoy all types of water sports and activities; especially becauseof the excellent, year-round weather. The sea temperature is quite close to theactual temperature, rarely dropping below 19º (66 F). Las Palmas de GranCanaria boasts some of the best sailing, body-boarding and surfing on theisland. There are also places to go paragliding and jet or water skiing and many other interesting adventures sports where you can practice Spanish or even help you Learn Spanish in Tenerife or the rest of the Canary Islands.. Asidefrom the water sports, LasPalmas offers places to golf, hike,cycle and much more.

There are a few museums in the city that offer anexposure to some of the city’s history and culture. To see some antiques andart from the Canary Islands visit the Canary Museum.  You can also visit the Casa de Colón (Houseof Columbus) which lays out Christopher Columbus’ travels as well as more artand history of Las Palmas de Gran Canaria. If you are interested in seeing a dance or theater performance stop byeither the Teatro Cuyásor TeatroPérez Galdós or Auditorium Alfredo Kraus.

On the Gran Canaria island and within the city of Las Palmas de GranCanaria the food shares similarities with the other islands and even some partsof the Peninsula. The core foods are, of course, seafood and a mixture of produce growninland. The preparation styles are quite varied, however, between Gran Canariaand the mainland of Spain.

A popular seafood dish that you can find on most local restaurant’s menuis Sancocho. It is made up of asalted fish, with potatoes and yams, olive oil and seasonings to taste. Othercommon fish dishes are fried moray and marinated tuna. These can be foundthroughout the city and the whole island, maybe with slight variations fromplace to place.
Yams and potatoes were not a native product on the island, but they made theirfirst appearance after the discovery of the Americas. Today, they have becomea major part of the islands gastronomy. Many other vegetables and spices can befound growing on the island; tomatoes are perhaps the most popular as they area highly regarded export and found all over Gran Canaria just like bananas (platanos).

Much like the rest of Spain,the nightlife on the island is lively, energetic and fun.  That also means that things don’t get starteduntil later as well.  Most bars openaround midnight or 2 a.m. In Las Palmasa good place to go out at night is around Plaza de España, around the Mesa yLopéz area. For rum lovers stop by LaRonería (Rum Museum) which serves all rum drinks. It’s only open at night from 9 p.m. – 2 a.m.Close to the largest campus of the university, in the Tafira zone or in the obelisco (the second campus), and you canfind several bars and pubs that will have more of a student atmosphere, also inthe Santa Catalina district there are many places to enjoy a night out on the town.