The capital of Spanish region Galicia is Santiagode Compostela. The city is located in the province of A Coruña and itis most famously known for being the home of the remains of St. James theApostle.

The population of Santiago isrecorded to be about 93,000 inhabitants, but truer estimation would be closerto 130,000, including all the university students.

Besides being the burial grounds of St. James, Santiago is also the last stop ofpilgrimage route, Camino de Santiago. The city was declared by UNESCO as aWorld Heritage site and the fame of this medieval trek brings in thousands oftourists to the city each year. Santiago is steeped with a deep history, the Camino de Santiago; among severalother important cultural and historical aspects make the city one of Spain’s most monumentalcities. Adding the lifestyle and atmosphere that the university brings in, Santiago is a very multi-facetedculture to live and study in

The history of Santiago de Compostela is one oflongevity and with quite interesting facets. According to Christian beliefs, Santiago was theplace where St. James went to preach and convert people into Christians.

Excavations prove that the old town was under Romanrule into 7th century. The Romans called Santiago: Finis Terrae, which means the ‘ends of the earth,’ which is what they thought theywere at during that time.

Historians and legend tell that the Apostle Jameswas named the patron saint of the kingdom of Asturiasbecause King Alfonso II recognized his tomb. King Alfonso II wanted to beat outthe Moors’ in their expanding conquest of the Iberian Peninsula to make a center forChristian worshippers. The first church was constructed in Santiago in 830and ever since then the city has been of extreme religious importance in Europe as well as throughout theworld. People have made the pilgrimage, Camino de Santiago, since the city’sfoundation.

Unfortunately for the King, the Moor invasion wasable to overtake the city at the end of the 10th century. They did,however, respect the sanctuary created for St. James the Apostle.
Although the construction of the Romanesque cathedralwas started in 1075, the project was not completed until the 13thcentury, most likely because of the Moorish presence in Santiago.

Like many cities in the time, throughout the nextcenturies, Santiago underwent many alterations, most noticed were theRenaissance and Baroque, but you can also see elements of Neoclassicism in thecity’s  structure today.

In the 1800s the city gained control of the Plazade Abastos, what is, today, the city’s market, and the Alameda Park. Therewere walls surrounding the city, which were used in the past to protect thecity, these were taken down, which also added to the dramatic change inappearance to the city.

In the early 1980s, Galicia became an autonomousregion of Spain and Santiago de Compostela became the seat of government for the region.

Throughout the city of Santiago you canfind a tremendous amount of cultural and historical attractions. The citydivulges its heritage in many facets, but probably the most famous monument inthe city is the Cathedral (where St. James is supposedly buried). It is ahighlight to see this grandiose masterpiece, even for those not very interestedin the religious background.

Take a stroll through any one of the number of parksthrough Santiago, with the green, lush surroundings you can see a lot of beauty throughthe natural landscapes. Plus the two rivers, Ulla and Tambre can make for anice relaxing atmosphere. The best place to view a brilliant sunset is atopMonte Pedroso, a hill just outside of the city center that gives you a wholeoverview of the city and Cathedral, plus the best spot for a sunsetphoto-session. Of course, you can find all types of sports activities, golfing,bicycling, diving, fishing and different places for fitness workouts.

The Mercado de Abastos takes up over 5,500 square meters and is situatednear the Cathedral. Besides being able to pick up your favourite foods, thismarket is a sight to be seen, with all the vendors bustling around, preparingtheir freshest products. The colors, sights and smells make it the second mostvisited attraction, after the Cathedral, in Santiago de Compostela.

Santiago has the gastronomy to feed any hunger. It is known to be rich on thepalate and liberal in terms of portions. The main market in the city, Mercado de Abastos, brings in fresh seafood each day and produce that comes directly from their land. In many bars andrestaurants in Santiago, there are unique displays of these products.

In Santiago it’s possible to order a full, three-course meal if you are feelingquite hungry, but there is also the option to order raciones which are comparable to tapas found throughout Spain. But raciones tend to be a bit bigger, meantto be shared in a group. Different plates can include: Spanish omelet, chesses,variety of seafood, meats or vegetables.

In general, the local favorite in regards to seafoodtends to be mollusks and crustaceans. But, that doesn’t discount the deliciousflavors you can get with prawns, shrimp, oysters, crab and mussels. Usually youwill find these types of seafood grilled or boiled, but rarely accompanied bysauce. Sauces are said to be used only to cover up a lower quality of fish orseafood. Galicia also has a well-known way to prepare octopus; it is boiled and garnishedwith olive oil and cayenne pepper, and sometimes served with potatoes (cachelos).

Santiago is home to world-renowned Galician beef which supplies tender sirloinsteaks for the barbecue, but in the winter time, pork is much more common inmany dishes.

To cleanse your palate after all the rich flavorsoffered from Galician food, try any one of the many wines that are produced inthe region.

Nightlifein this capital city can be compared to many other Spanish cities in the sensethat there is something for every taste and liking, and that things don’t starthappening until later in the evening. 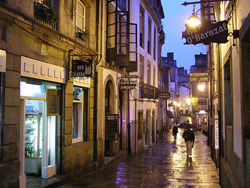 Santiago has been called acity that is never completely asleep, the university setting may have somethingto do with this, but normally on every night of the week you can find somethinghappening. It is actually quite regular that people go out for drinks onSundays and Mondays.
Walking through the streets in the center you will see a variety of bars, clubsand discos, each providing a different genre or setting.

Some nights in Plaza de la Quintana or Plaza del Obradoiro there will be live,street artists playing their favorite tunes.

The center is distinguished by two main areas for going out, old town (where most of the Spanish schools in Spanish Schools in Santiago de Compostela are located) and Ensanche (new town). The two are alikein the sense that each has a diverse array of places to go out and in terms ofclosing hours. The streets of old town have a pub or bar on basically everystreet. Follow the crowd and you will find some place to suits what you arelooking for. Ensanche is more tightlyknit; you will find the clubs, bars and restaurants more close together. Amidthe streets of República de El Salvador, Carreira do Conde,Alfredo Brañas and Motero Ríos are typically the most frequented places. Alsonear the Plaza Roxa there is a good selection for nightlife

Study At University of Santiago